I've installed UMotion into a new, relatively clean project in Unity 2021.2.0b8. Everything is working great, with the exception of the Tool Assisnt not being visible in the scene view. Toggling it on and off via the display settings group does nothing. There are no errors or warnings. It is just not visible - I suspect it is possibly being drawn off-screen? Is there a way to manually modify its position in a settings file or asset?

Leaning While Running and Climbing

Hello!  I finally have some time between my programming jobs to work again with UMotion Pro and wondered:

1) Do you have (or know of) any tutorials showing how to lean characters when running or climbing?  I want to blend a lean and have the lean based on speed and the sharpness of the turn.  Also, for walking up/down stairs want to lean toward the slope somewhat.

2) If not, do you have any suggestions to an approach?

Thank you for a great tool, too!

As the amount of the leaning is dependent on the current runtime situation, you can't do this in a static animation file (otherwise the leaning amount would always be the same). Thus using UMotion Pro for this won't work. I haven't done something like this myself yet, but I think your best bet is to do this via code in your character controller.

A quick search gave me this video tutorial which might be helpful:

Is there a way I can have UMotion remove duplicate/redundant keys within a clip?

Unfortunately there is currently no way to automatically remove duplicate/redundant keys.

Hi guys. So I'm creating an animation of a character holding a gun. It looks perfect in Clip Editor but when I exported to Anim file and ran it on Unity Timeline, it looked like the second pic. The gun was off position and I don't know why. 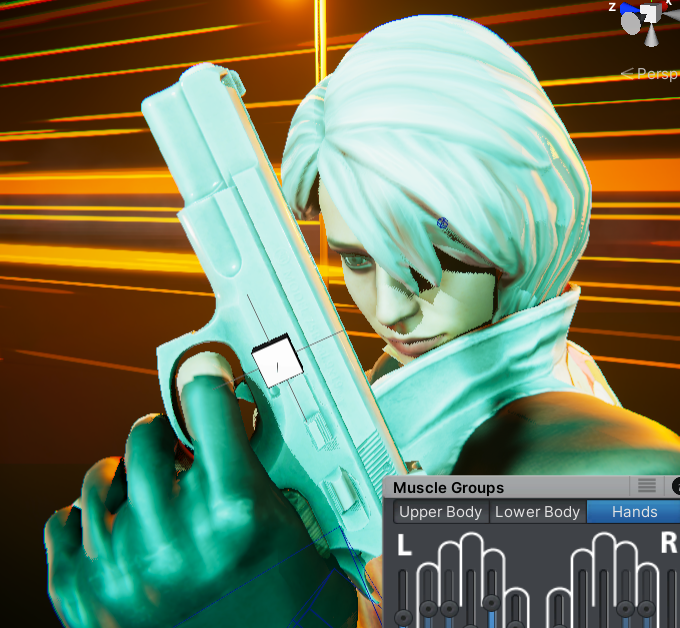 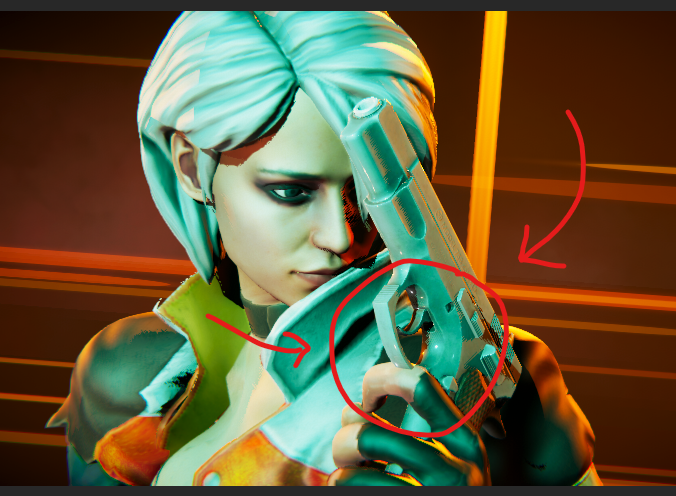 Hi Sang,
thank you very much for your support request.

The child-of constraint only "fakes" changing the parent by generating key frames that make the pistol act as if it's a child of a different parent. (This is needed because it's technically not possible to alter the parent/child relationship from within an animation.) This "fake" works as long as the real parent isn't moved to a different spot than it was while exporting the animation. It's also necessary that your hand is in the same spot again in the exported animation. If your character uses the humanoid animation system, it is not guaranteed that your hands end up in the same spot (due to the re-targeting algorithm of humanoid).

Maybe you are using an override layer in your timeline that alters some of the pre-baked positions? When you play the exported animation directly on your character (not using Unity Timeline, does it work then)?

If you're using humanoid, I recommend using "generic" instead. Generic is playing an animation 1:1 as you've authored it while humanoid uses animation re-targeting which only "approximates" your authored animation (here's a good explanation how humanoid works: https://blog.unity.com/technology/mecanim-humanoids).
Using humanoid will give you lots of headache if your trying to do precise hand interactions that are close to the camera (thus very visible to the viewer) because humanoid's "lossy" nature (due to the re-targeting) introduces lots of small position errors.

To switch to generic, simply duplicate your source character. Configure it as generic. Create a new UMotion project of type generic for your generic character. Import the old humanoid UMotion project file (the *.asset file, not the exported animations!). This results in a new project of type generic with all your previously created animation. Export the animations and use them on your generic character.

Let me know in case you need any further help.

IK Pinning on elbows or knees

Is there any way to pin the elbow or knee instead of the and or foot?

Yes, you would need to setup an IK chain that only includes the upper arm/leg. The IK handle would then define the elbow/knee position (instead of the wrist/ankle position). As the IK setup is UMotion project wide, I recommend that you do this in a separate UMotion project (in order to not destroy the regular IK setup probably used by other animations in your UMotion project).

For more information on how to setup IK chains manually, please follow the second part of the IK video tutotrial:

Here's how to setup IK pinning:

In certain frame area, the hand must remain stationary, with no change in position and rotation.

I think it can be done using IK Pinned option.

It works, however the position and rotation of the hand are fixed only when all the backend keys are removed.

For the next animation, IK Pinned option must be released again after some frame area.

Isn't it possible only work in a specific frame section?

This problem is resolved. I replied it before, but it was not saved.

My models has always a lot of blendshapes (sometimes > 100), which are all bound on the head and are used in my animations. But when you are focused on the skeleton, this blendshapes forces you to scroll up and down all the time. Is there a way, to hide them temporary? If not, maybe an additional filter option would be nice for this 4 types (IK, position, rotation, "plus")? 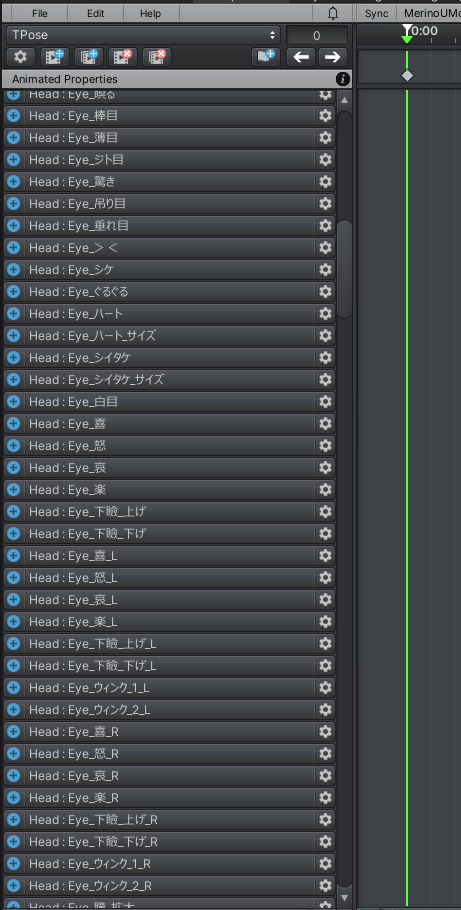 If you want to hide the blend shapes, go to config mode and select the bone that contains the blend shapes (the head bone in your case). Then under "Properties" set "Visibility" to "Lock". Don't forget to unlock the bone once you're done.

But when you are focused on the skeleton, this blendshapes forces you to scroll up and down all the time.

adding objects to rig after configuring the rig

I have a rig I have already configured, and I now want to attach an object to the hand of my rig and use it as a constraint. However I am unable to add it, or am I missing something? I have tried to set it as a child (not possible), tried adding a constraint and attaching it to it but no luck there as well. Any ideas are welcome, I hope my question is clear :)

While a character is assigned to the pose editor, it is locked by UMotion for any external (i.e. outside of UMotion) changes. So in order to add an additional child object to your character, you first need to un-assign the character from the pose editor by clicking the "clear" button:

You can then add the object as a child to your character. Then assign the character to the UMotion pose editor again. The child object is then automatically added to your UMotion project configuration.

Please note that if your character is of type humanoid, none-humanoid bones/tranforms need to be manually released for animating. You can do this by going into config mode, select the transform from the rig hierarchy list. Then under properties, set visibility to "Show".

Is it possible to add child of constraint to IK handles?

Yokenstein 3 weeks ago • updated 3 weeks ago • 2
The object (sword) needs to be grabbed onto by 2 hands. I have the game object parented onto one of the hands (not via Umotions parenting system), but I want the other IK handle/hand to stick to the game object, rather than me trying to manually keyframe animate the correct positions of the hand. Is this possible?

If you've setup your IK chains manually, you can just add a child-of constraint to your IK handles manually (in config mode).

More information about the child-of constraint and IK pinning can be found in the following two video tutorials:

I am considering to buy the plugin right now but i have a question. I'll try to be as straightforward as possible:

Is this feasible through UmotionPro??

If yes, is there any tutorial that covers something similar??

Thanks a lot to everybody.

Yes that is possible, I would do it as follows:

There is no tutorial that covers this use-case in particular. As this use-case requires quite a lot of different systems and knowledge working together, you might want to start with something simpler and then progress to this more difficult use-case. But that's up to you.

Here you have the getting started video tutorial that covers the basics of UMotion:

Here is a longer tutorial where I'm using UMotion to edit an existing animation. It also uses the convert FK to IK feature I mentioned above:

Here is a short demonstration of using UMotion together with Unity Timeline (you can also check the manual's page "Unity Timeline Integration" for a more detailed explanation of the sync feature):

You can find a nice overview of all available video tutorials in the "Video Tutorials" chapter of the UMotion manual. If you have any questions, let me know.

For support requests that don't fit into a public space like this forum, feel free to use our email support form.