Important Information: I'm out of office from August 13th until August 27th (inclusive). Your support requests might not get answered during that time frame, but I'm going to make sure to answer all of them on August 28th.

Thanks for your understanding.

No similar topics found.
No topics

Lost the root on converted animations

Hello I lost the root of the humanoid animation converted to generic do you know why ?

Please make sure that in your generic character's "Rig" tab (shown in the Inspector), you have set the Root Node to the same transform that is used as "hips" in your humanoid avatar configuration (shown when clicking on "Configure..." in the Rig tab of your humanoid character). 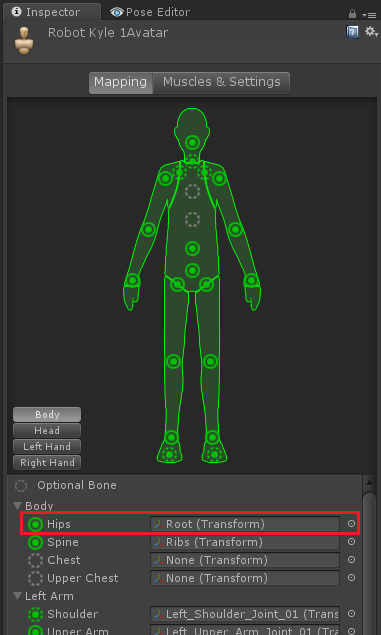 If this doesn't help, please send me everything I need to reproduce your situation so that I can further investigate via the email support form. You can request a link to my Dropbox (via email) in case the file size exceeds the limit.

I'm attempting to convert some Humanoid animations to Generic animations which I'd like to then import into uMotion for editing. The conversion mostly works, however the root motion appears to be lost and/or incorrect in the final .anim file that is produced.

The input Humanoid out output Generic rigs both have root motion setup correctly and working. Root motion works in the inspector preview and within the game at runtime. After using Animation Converter to convert this Humanoid animation to Generic, the root motion no longer works correctly.

Here's a video of an example the the full process so you can see what is happening. Note that selecting "Loop Pose" makes the preview root motion appear to work - but once this is imported into uMotion, the root motion data is completely gone (see second video).

Is there something I'm missing here? How can I bring a converted Humanoid -> Generic animation with its original root motion into uMotion?

This problem is fixed in Animation Converter V1.03. Thanks for reporting.

Regarding the Animation Converter (haven't purchased yet) - my main character is a Generic model that can't be converted to Humanoid in the Unity Rig Import settings because he lacks certain features (such as hands & feet). It's a very simplistic model.

Do you think Animation Converter will still work with my generic model? Looking to convert basic humanoid run & jump animations.

Hi,
thank you very much for your support request and your nice words.

Unfortunately it is not possible to convert between generic/humanoid if your character is not compatible with humanoid.

I am trying to figure out what to do for my quite specific setup. Any help would be greatly appreciated.

I have a prefab that was created programmatically from a mocap. It uses a "legacy" type animation. In Unity this prefab looks like this:

What I want to accomplish is to upgrade it for modern Mecanim/Humanoid.

I managed to extract the animation clip (*.anim) from this prefab, then opened Animation Converter and placed the clip into the upper box. Then I created a new prefab to be my target (let's say I can use Robot Kyle here). If I understand correctly, I also have to provide the "source prefab" to Animation Converter. It doesn't let me do it, though, complaining that only an Animator or an Animation component must be attached to the Prefab.

I tried to create an empty prefab and placing my animation there, but in this case I just obtain an empty animation as a result. What should I do?

When converting from generic or legacy to humanoid the following requirements need to be full-filled:

That means that you would need to duplicate the prefab and try to see if you can configure it as humanoid (but I think Unity doesn't support changing the configuration of prefabs, it's only supported for models).

Assuming I use BVH file where Y axis is up and Z is forward.

My need then is to export it into Blender mofify the keys.

I would like to know i it's possible to convert the FBX si when it I use it with Blender the local axis z, Y are switch so they match the Blender settings. , i.e. Z up and Y forward.

Can you kindy advise?

I'm not that experienced with Blender but you might want to check out the "Manual Orientation" option Blender has when importing a *.FBX file (into Blender):

Btw. I just noticed that Blender also has this option when importing from *.BVH:

I hope this helps.

it is possible to convert .anim in FBX or in .blend ? To work with Mocap in Blender...?

Helo ! I would like to know if with this asset i can convert some mocap animation in .Blend ou in FBX for import in Blender.
Or existing an other way to import Mocap in Blender........

Thanks for your answer !

The Animation Convert can't convert animations to *.FBX. But you can use my UMotion Pro asset for exporting *.anim files to *.fbx:

1) Create a new UMotion project and assign the character that you want your animation to play on.

3) Click on the gear icon to open the settings:

3 c) Select the *.fbx file of your character that you assigned to the UMotion project previously as destination file. UMotion is then exporting the animation into that *.fbx file. If you're character is a *.blend file, export it to *.fbx from Blender and then start again from step 1).

4) Open the *.fbx file of your character in Blender. It now has the animation attached. 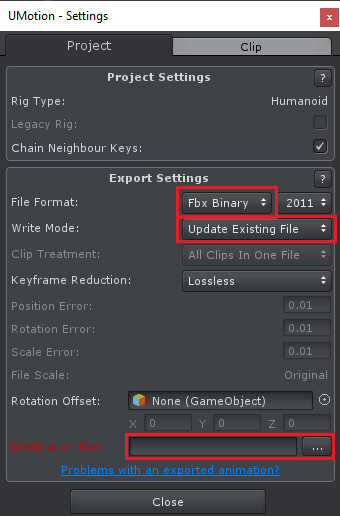 Please let me know in case you have any follow up questions.

Unable to find pluging on menu

Hi I just bought an animation converter from your guys after installing it. It doesn't shows in Window --> Animation Converter? how can I access it please help? I am on 2018.4.13f1

This can happen if there is any compilation error in any of the scripts in your Unity project. Please ensure that you have no red errors in your Unity console. If that doesn't help, please try to restart Unity. Please also try to remove the Animation Converter folders and re-import it from the Asset Store if none of the above has helped.

Please let me know in case you need further assistance.

Also is it possible to overwrite an existing clip instead of creating a new one with this utility so that during runtime a controller with a reference to the resultant clip can exist before the conversion?

Legacy => Humanoid no keys generated, no errors in log

I bought Anim Converter as I'm trying to convert some imported BVH files to Humanoid. (I also own UMotion Pro)

The converter appears to run with no errors in the log, however the output animation contains only two frames - start and end, and they're both the un-animated T-Pose.

The process I'm using here is to parse the BVH, build a hierarchy that directly matches it, then parse the animation channels and generate a legacy AnimationClip from them. This all works fine - I've attached cubes to the joints for debugging and can see the animation running both in Inspector and in game.

I'm then using Animation Converter to retarget onto a standard Humanoid rig - for now I'm just using Ethan from the Unity Standard Assets (imported as Humanoid not Generic).

Things I've also tried are building a Generic Avatar instead and Generic => Humanoid, this ends with the same result. No errors, no keys.

Note, it's not possible to dupe/re-import the legacy rig as human as it's not an FBX/Blender.

"I bought Anim Converter as I'm trying to convert some imported BVH files to Humanoid. (I also own UMotion Pro)

The converter appears to run with no errors in the log, however the output animation contains only two frames - start and end, and they're both the un-animated T-Pose."

A legacy/generic clip only plays correctly when it uses the exact same hierarchy (and initial rotations) as the character you want to play it on. When you convert your BVH to a legacy (or generic) *.ANIM, try if the clip plays correctly on your legacy (or generic) character. For me it sounds like Unity can't play your *.ANIM clip, thus the character stays in it's T-Pose during the whole conversion process.

Please try to use an avatar created by Unity's model importer instead of a custom created one (this ensures that everything is setup correctly).

Another way to convert your BVH to humanoid would be by using UMotion Pro. Create a new project with your legacy character, import your generated legacy *.anim. Export the whole project as *.FBX (attention: set "write mode" to "Update Existing File" and select your character as destination *.FBX). Then open your character's Inspector and change it's rig to humanoid.

Please let me know if you need any further assistance.

I changed my existing Ani Data Legacy => humanoid. The problem is that the soles of the feet stop in Legacy, but the feet move a in Humanoid. Is there a way to solve this?

This is a common error introduced by the "humanoid" animation system and is called "foot sliding". It's introduced by the "lossy" nature of the "humanoid" re-targeting engine. Unity has implemented a feature called "Humanoid Foot IK" to fix that issue. When you preview your animation in the "Inspector" window, you can toggle an "IK" switch to see how your animation would look like with that feature being enabled. You can enable Foot IK in your animator controller.

For more information, I recommend reading this Unity blog post (check out the "Original hands and feet position" headline): https://blogs.unity3d.com/2014/05/26/mecanim-humanoids/

For support requests that don't fit into a public space like this forum, feel free to use our email support form.