Only avatars created by Unity model importer are supported UMotion

I have a rigged, working Humanoid model in Unity 2019, its fully animated and works as expected, yet when i drag it onto the pose editor I get the above error message.  Any clues what I might need to change?  The model can be exported and imported into unity as is so i dont understand the error.

Please make sure that in the "Rig" tab of the import settings (shown in the Inspector when selecting your character's source file in the "Project Window"), you have set "Avatar Definition" to "Create from this model". This is to ensure that Unity generate's a humanoid avatar from your character.

Please make sure that in the "Rig" tab of the import settings (shown in the Inspector when selecting your character's source file in the "Project Window"), you have set "Avatar Definition" to "Create from this model". This is to ensure that Unity generate's a humanoid avatar from your character.

I can't find it.Where can I find it?The 3D character model is make of VROID.

I can't find it.Where can I find it?The 3D character model is make of VROID.

the "Rig" tab is shown in the Inspector Window when you have your character's source file selected in Unity's Project Window: 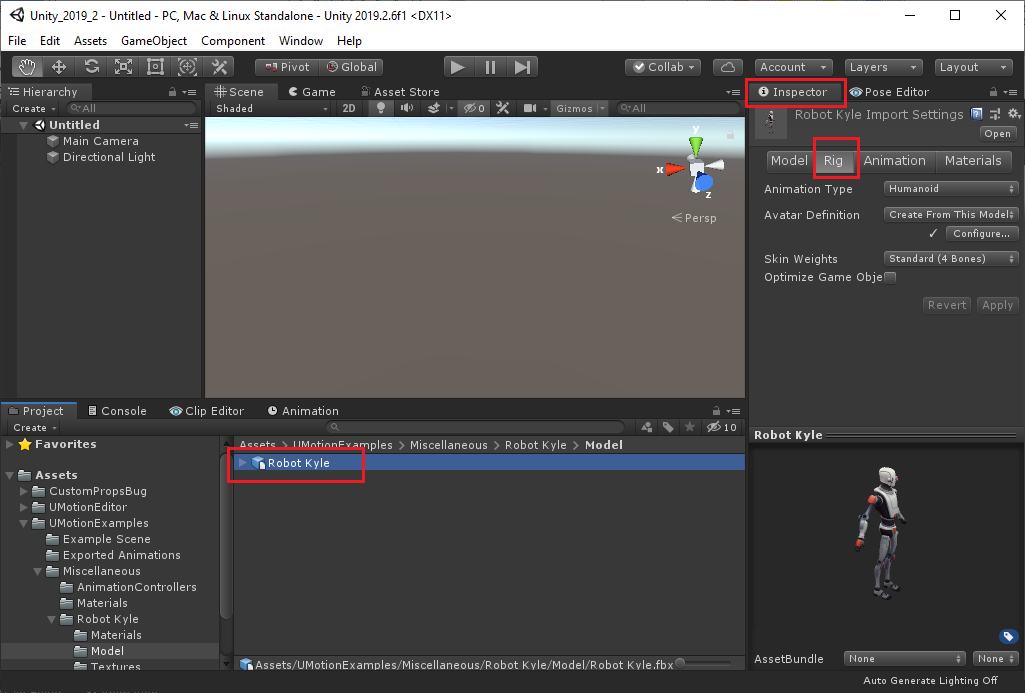 I don't know where is the error, I can't find it. 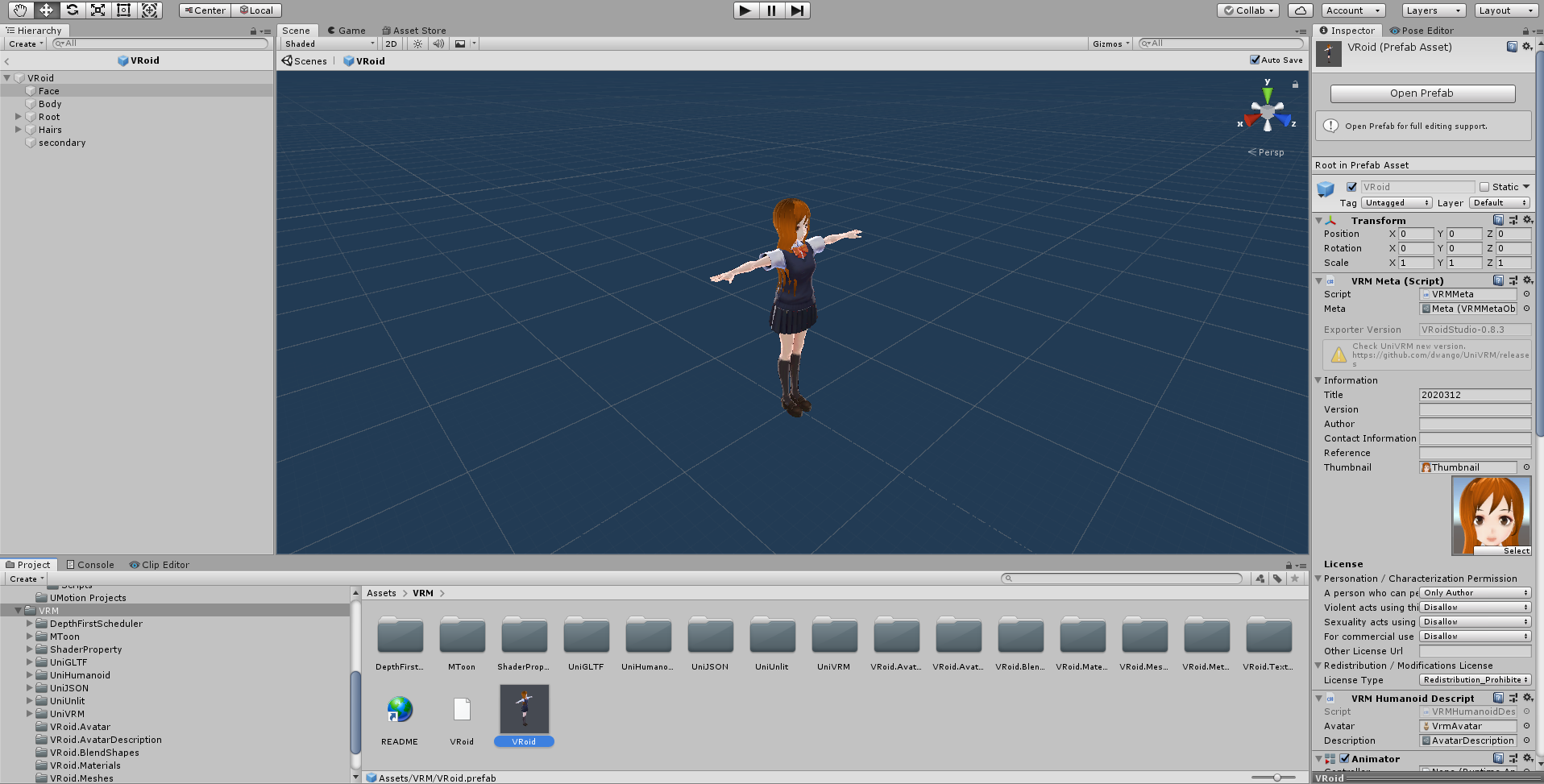 You are selecting the prefab but not the original model. Search for the model's source file (it usually has an *.fbx file ending). If your character doesn't have a source file (because it is generated inside Unity by some character generator scripts), you need to make an *.FBX file out of it. You can do this by using Unity's FBX Exporter (you can install the FBX Exporter via Unity's Package Manager; don't use the version from the asset store it is outdated). Once you've exported your character to *.FBX, drag the *.FBX into your scene and use that character in UMotion (instead of the prefab).

Let me know if you need further assistance. 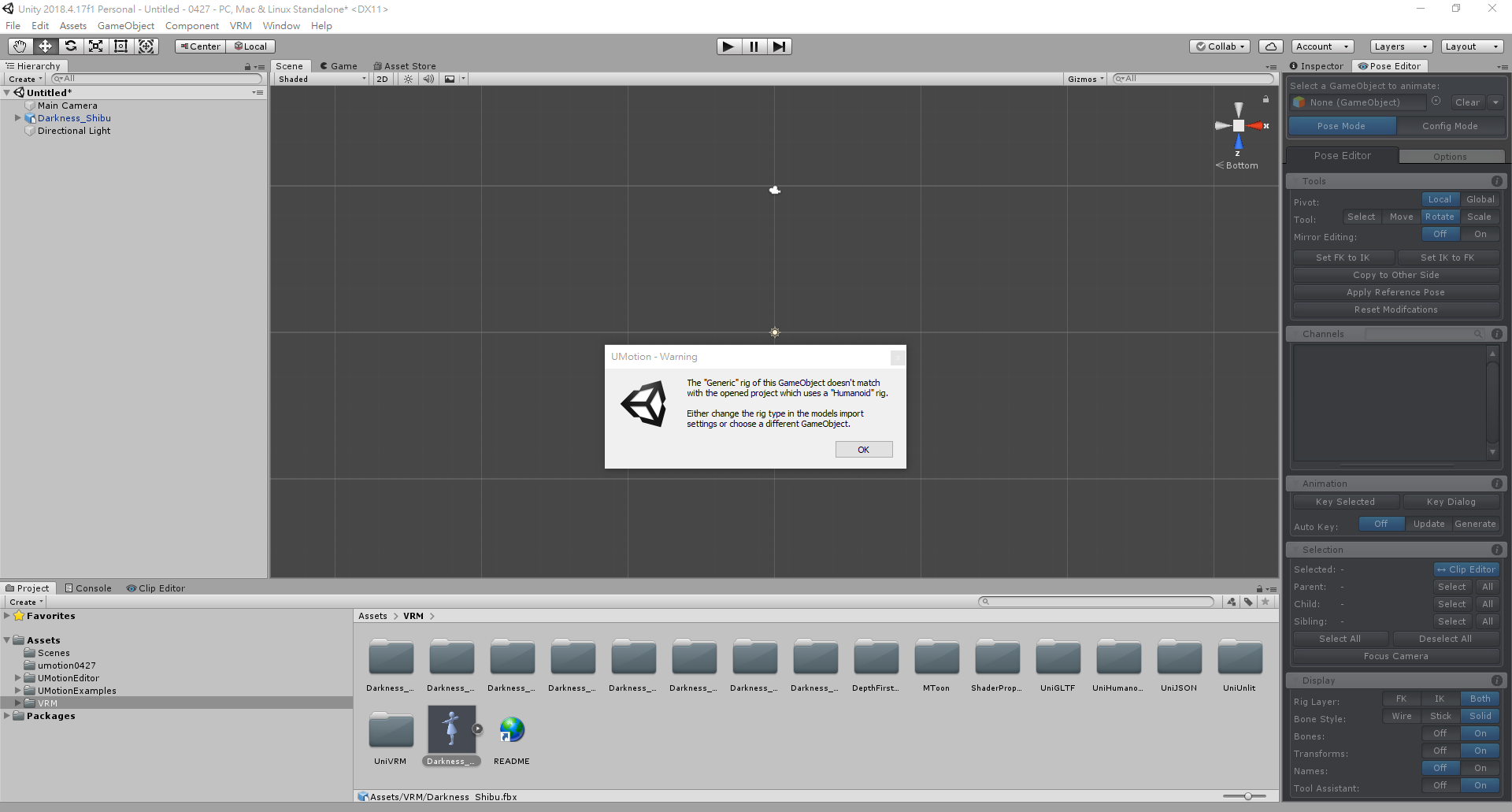 You can find all video tutorials in the manual's dedicated "video tutorial" section or on our Youtube channel: https://www.youtube.com/watch?v=beH_hB4YwaY&list=PLI-5k9R34MAzGs-FomlWDZQXF93w6qyfD

I am adding to this thread as I am also attempting to use UMotion with VRoid Studio characters.

Warning: I am relatively new to Unity, but learning fast!

I am trying to work out the best workflow using Unity and VRoid characters (and Unity models, terrains, etc) to create simple animated videos. So the goal is to make the characters act and generate a MP4 file, not build a game.

I started using the Unity built in timeline editing support (with the new 2020 Rigging Animation constraints), but it is excruciatingly painful. The screen only reflects changes I make in the animation clip if I am lucky half the time. This makes animation incredibly painful and slow - which is why I purchased your Pro extension. Anything that could speed up the process would save me a lot of time and hair pulling.

VRoid Studio is free software allowing you to create Anime style characters relatively easily. It exports characters in VRM format, which can be loaded into VR Chat and other applications. There is a UniVRM package for Unity that can import VRM creating the prefab (as above). It uses the "VRM/MToon" shader for a more "cartoon" feel, but which also supports transparency in the texture. I also extended the shader to blend between textures, so I can make the face blush (or sweat, or other expressions enhanced by texture changes). I also added lots more blendshapes to the face. I also add extra components to objects, MagicaCloth for better hair blowing in the wind etc. I do the same flow to every character.

I hit exactly the same problem as above, where you recommended to export to FBX and reimport that file back in.

I did an FBX export and loaded the FBX file back in, but all the materials had converted to the "Standard" shader. This lost the transparency support. It also lost the VRM/MToon shader so the texture blending support is lost. So I "extract materials from FBX" so I can modify them, then changed all the shaders back to VRM/MToon, changed Opaque to Transparent, and it seems to be coming back to where I started from... and I can drag the character now into the Pose panel! Success!

It also found all the blendshapes, and included them - so that is good.

There are a few things I have not worked out how to do yet (but have not finished reading the manual yet).

* Have a script on the character that I want to animate properties for as well (the float lerp between normal face texture and blush texture - I have a component on the root character with a property of "blush lerp" where 0 = normal and 1 = full blush. I have not worked out yet whether your tool can handle animation of float script properties

* Do you support avatar masks? I was planning on having an override tracks for the facial expression, left hand, and right hand. So I can have the main body walk etc, then start layering on top other animation clips (e.g. for hand positions - point, make a fist, etc).

I was curious to see if you thought I was heading in a sensible direction or not. It seems to be a bit of extra work, but doable.